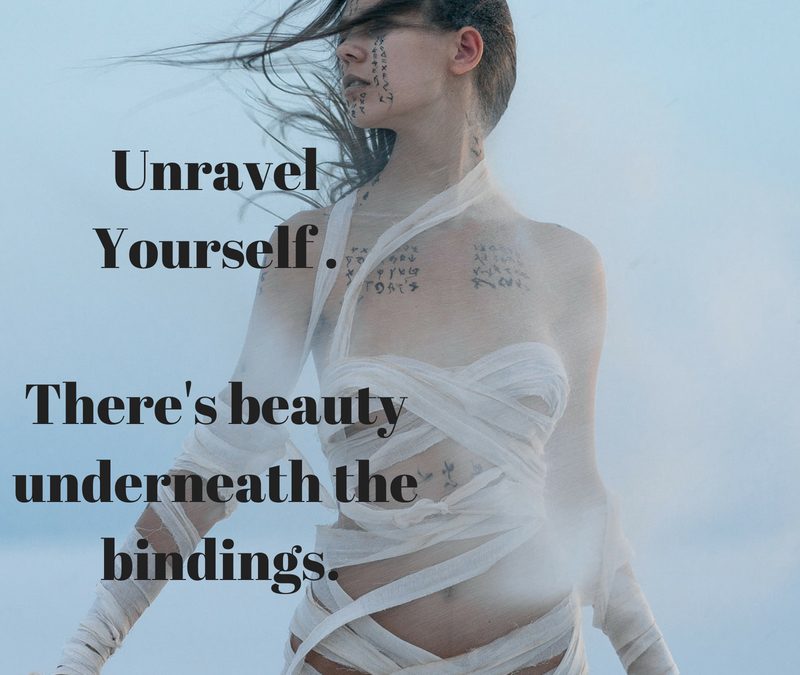 I have been unraveling lately. I’m like a mummy who is pulling off one bandage only to find another. Wondering why I let myself be bound and gasping to realize I put most of the strips in place myself.

Creating so many rules for myself:

✅It’s ok to be spiritual, but not to talk about the shadow self

✅It’s ok to share funny memes on social media, but not uncomfortable truths

✅It’s ok to talk abut love and light, but not candle magic and ancestor altars

✅It’s ok to have tattoos of butterflies, but not sigils

✅It’s ok to believe in the law of attraction, but not Pagan goddesses

✅It’s ok to enjoy nature, but not to worship it

✅It’s ok to hide my light, but not to make people uncomfortable when I shine

What would “they” think?

Slowly I added layer after layer of arbitrary rules about who and how I’m allowed to be in the world. Some given to me and some discerned from what I believed about the world based on my limited perspective.

Eventually, it became harder and harder to move in the world. Range of motion and emotion limited by all the bindings.

So I’ve been pulling them off. Unwinding them piece by piece.

Now I realize that I can chuck the whole mess of them in the trash.

I don’t need artificial binds to
keep me safe.

My safety is my alignment to my source and my higher self. I can trust my own soul.

I never thought my goal would be to move naked through the world, but it is, —metaphorically naked, anyway.

Naked but with the strongest fucking boundaries.

Nudity can make us all a little uncomfortable. I get it. If I start to move into a realm that makes you uncomfortable, you have two wonderful options.

1. Unsubscribe, unfollow, & avert your eyes (it’s a perfectly fine choice. No judgement here. I know that as I share more of my truth, it’s not going to be in alignment with many of you and you’ll leave and find others who more closely share your truth. There are so many paths, follow the one the resonates with you.)

2. Check yourself for any bindings of your own that you might want to unravel. Maybe you don’t want to believe those arbitrary rules you have for yourself anymore either.

Just don’t ask me to replace my bindings. I’ve no desire or ability to go backwards.

If you find you want to drop off you bindings, too, come join me tonight dancing under the Taurus Moon naked, metaphorically, of course. 😉