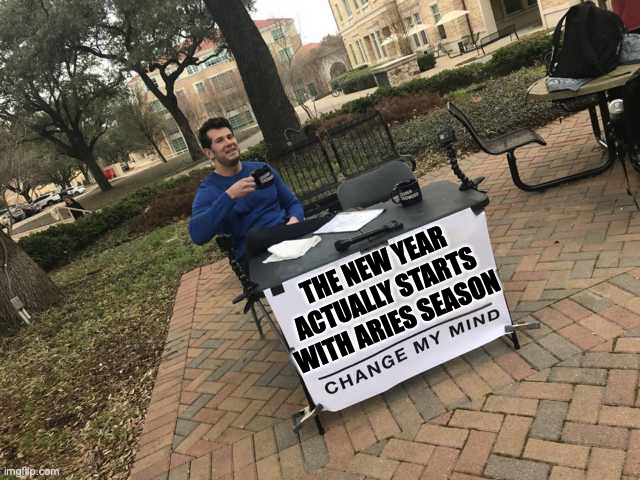 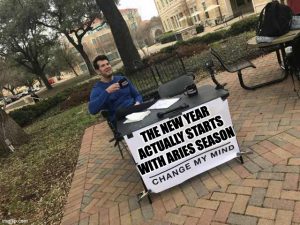 This Aries season started two days ago, and I would argue that the first day of Aries season should actually be New Year’s Day. Why?

September is currently the ninth month of the year but doesn’t sept mean seven?

October is currently the tenth month of the year but doesn’t oct mean eight?

November is currently the eleventh month of the year but doesn’t novem mean nine?

December is currently the twelve month of the year but doesn’t dec mean ten?

Ok, it’s probably not a big conspiracy theory and this is all just because the Roman calendar had only 10 months starting with, drum roll please…

Honestly is only makes sense that a new year would start around the Spring Solstice and not close to the winter solstice. Hello? We semi-hibernate in the winter. When do we start to see new life emerge? Spring! *

Either by design or accident, our timing for starting New Year’s goals in January is not properly aligned and I would suggest that now is a perfect time for a reboot.

If you are one of the many quarantined or semi-quarantined folks, then you’ve got some time to make some plans and I happen to have a gift for you.

I have a few hardcover Moon & Magick: 13 Moons of 2020 plannersleft. Life was just too chaotic for me to market and sell them back in their season and I hate for them to go to waste. There are lots of magickal planning pages and you still have three quarters of the year to fill in. If you want one all you have to do is pay the shipping and it will be on its way to you. Just Use the code FREEPLANNER

If you are not a pen & paper kind of planner, you can get the digital version free as well. Just join up for a free weekly trial of the Daily Alchemy Premium Member’s Lab and download away! The digital planner is in there along with tons of alchemy classes and experiments to try.

P.S. Come on over and conjure up some magick during a one week free trial of the Daily Alchemy Premium Member’s Lab

P.P.S. The free hardcopy planner obviously applies to my limited stock on hand. When they are gone, they are gone!

*Note: I get that this makes no sense if you are in the Sothern Hemisphere, but the new year shouldn’t start near Summer Solstice either already way into growing season. Maybe the Southern Hemisphere should have their year start at a different time, but that is too complicated for our minds to wrap around in a globally connected world. However, if you live in the Southern Hemisphere and are socially isolating now could still be great time to do some planning.